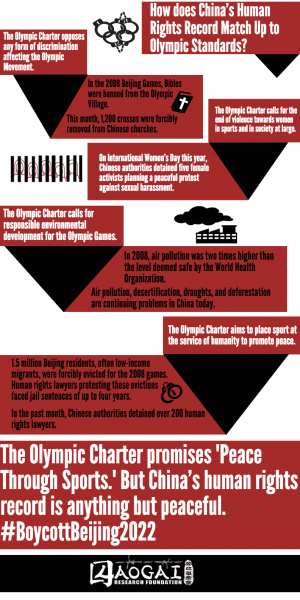 An infographic comparing the promises of the Olympic Charter with the reality of Olympics in Beijing.

Off-the-charts pollution, described by local officials as "heavy fog," choked the northern city of Harbin on Monday. The pollution was so thick that visibility diminished to only 100 meters.

Although the Harbin government reported an air quality of index (AQI) score of 500, China News Service reports that levels reached 1,000 in some of the city's neighborhoods. AQI measures the density of PM2.5 small particulate matter in the air. The US Environmental Protection Agency describes measurements between 301-500 as "hazardous" to health.